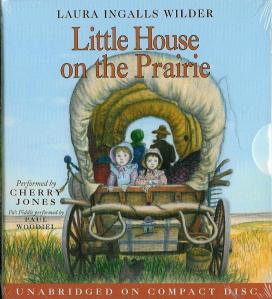 I have enjoyed reading Laura Ingalls Wilder’s books many times over the years. This time I listened to the audiobook version, which is read by Cherry Jones, who has a fine, deep reading voice. (You may remember her as the actress who played the female president on the TV show “24”.) She reads with enthusiasm and joy; obvious she loves the books too.

Growing up, I was under the impression that Laura’s books were totally biographical, and was puzzled when I noticed them in the fiction section of the library. Turns out that although the incidents in the book actually happened, some basic facts were changed to satisfy the publisher. For example, Laura was only 2-3 years old during the time they lived in Indian Territory, not 5-ish as the book portrays. Also, baby Grace didn’t arrive in the Territory with them, but was born just a few weeks before they moved out. Other facts were altered as well.

That being said, don’t let that stop you from reading this book! It’s totally amazing to hear how they built a house from scratch, dealt with fire, lived in wolf territory, and survived malaria. You’ll get a good picture of both the harshness of prairie life, and the joy of a close-knit family living a simple life together. Written in 1935, it’s still enjoy by millions of people.