Andrew Klavan has written nearly three dozen books, most of them mysteries or psychological thrillers. Two of his novels, “Don’t Say A Word” and “True Crime”, were made into Hollywood movies. In 2009, he began writing young adult/teen fiction. Although I didn’t care much for his earlier novels, some of his later novels were outstanding – “If We Survive”, “Crazy Dangerous”, and “The Last Thing I Remember”.  I remember being puzzled by the difference between his books that had too much language and objectionable content for me to finish reading, and other books that I could hardly put down and were clean reads.

This book is Andrew Klavan’s auto-biography, and by the end of the book I understood why his more recent books were so different from his earlier ones. In “The Great Good Thing”, the author describes his childhood and adolescence in great detail. Outwardly, the Klavans were an upscale Jewish family living in a nice suburban neighborhood who looked perfect. But it was all a facade. Andrew and his father clashed constantly, the father criticizing everything Andrew did. The father also demanded that he become a devout Jew, and Andrew retaliating by becoming an atheist. As an adult, he experienced severe depression and a lack of meaning in life, even after he fell in love and married.

It took many years for Andrew to accept the possibility that there really was a God, and that God cared about him personally. But the spark of faith was there, and it slowly grew. After years of soul-searching and prayer, he decided to follow Jesus and was baptized.

This biography was hard to read in places, especially where he described in great detail how worthless and depressed he felt. It was very deep and analytical. He seemed to be stuck in a downward spiral that he couldn’t get out of. But the fact that he now has such a different life is a testimony to the power of Jesus and his love. This is a story worth reading. 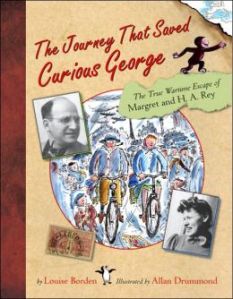 If you love the book “Curious George” and its sequels, you should pick up a copy of “The Journey That Saved Curious George”. You will find it in the children’s biography section of your library or bookstore. It is beautifully illustrated with drawings from Hans and Margret Rey’s books, along with photographs of the authors and scenes from World War II. The Reys, being Jewish, fled Paris on bicycles as the Nazi army invaded the country.

The story was very inspiring to me. The Curious George books are more than just entertaining tales. They are the work of two people who felt passionately about writing books for children, people who considered them important enough to be carried along on their hasty journey while almost all of their possessions were left behind.

Anyone about second grade or older will enjoy this book. You will find out what prompted Hans to choose a monkey as his main character. You’ll also learn what George’s original name was! Even though the book covers a frightening time in history, it is written in a lighthearted manner that keeps it from becoming depressing or heavy. This is an excellent biography for you to read with your young person as they learn about World War II.