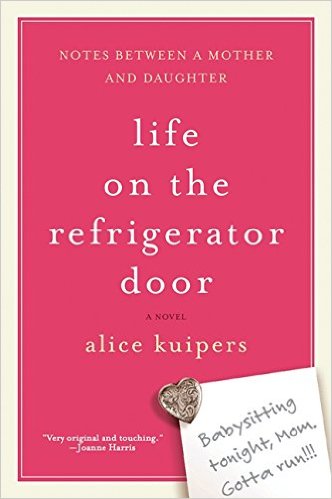 This book could have been entitled: “Home Alone”, since 15-year-old Claire appears to be always alone when she is at home. Her parents are divorced, and she doesn’t have any siblings to keep her company, only a rabbit named Peter. Claire’s mother is a busy obstetrician, totally dedicated to her job. Every time it seems like the mother (whose first name we never get) plans to spend an evening at home with her daughter, she gets called to deliver someone’s baby. Claire is disappointed over and over, so she ends up babysitting or going to her friend Emma’s house a lot.

The mother and daughter communicate by leaving each other notes on the refrigerator door. For some reason, the mother refuses to have a cell phone, so Claire can’t even talk to her when she’s taking a break at work. The trail of notes show both the love and the frustration the two of them have for each other.

I wanted to bop the mother over the head. She was missing everything in her daughter’s life – how she was feeling, assignments she was struggling with at school,the guy she was interested in, having fun times with her daughter, even simple things like sharing a meal or grocery-shopping together. I understand that she had a busy career, but seriously – she couldn’t get the two of them fancy phones to video-skype or at least talk on? She couldn’t pick one day off a week when her office knew that she was just plain unavailable? It’s unimaginable to me that a person could have only one child, then so totally forget about her. The story was fictional, but sadly, it’s reality for some kids.