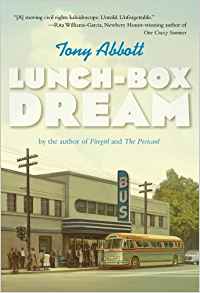 The retro feel of this book cover caught my eye, and the description sounded like a good story with some substance to it. It is set in 1959, just when the Civil Rights movement was simmering. The book jumps back and forth between two families, one black and one white, each with their own unique problems. Bobby is the main character. In addition to his parents having marital problems, he and his brother Ricky can’t stand each other. Bobby and his brother and mother are on a three-day road trip, driving their grandmother back to Florida. Along the way, they stop at Civil War battlefields because Ricky is obsessed with history, especially the Civil War. Ricky and Bobby are always arguing and fighting with each other. In contrast, the black family is tight-knit and loving. Their struggles come from outside the family – racism and prejudice when they are out in public. Their 10-year-old son Jacob goes missing and they are hysterical with fear that Jacob has been kidnapped or killed.

The story had such great promise, but just seemed to fizzle out. I thought at some point the two families would meet, that Bobby and Jacob would be talking to each other, that there would be some sort of conclusion that we all struggle with the same things regardless of our skin color. But the families actually never interacted with each other, making the story seem disjointed. Also, there was just too much bickering and fighting and angry words in Bobby’s car. Too much negativity in a story can kill it, and I think it  ruined this story. This is a book I should have passed on.