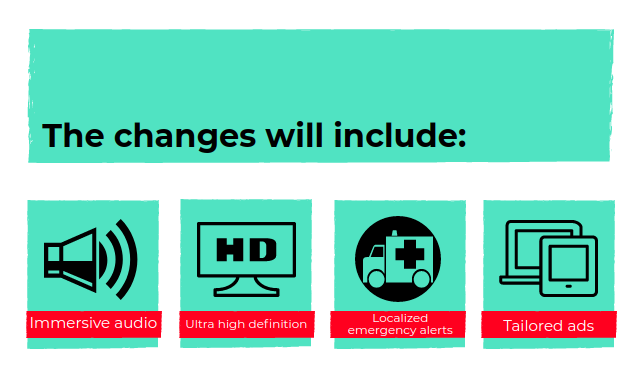 Is over-the-air tv dead? As a kid, over-the-air broadcast tv was the only option available. The picture was often grainy or snowy, depending on how far away from the tv station you lived, how good or bad antenna/rabbit ears you had, and if trees/buildings blocked the signal. Sometimes the picture rolled, or formed into strange diagonal sections, and you had to adjust the knobs on the back or side of the television set to bring the picture back to normal. The audio signal might be clear, or it might be mixed with static that rendered it indecipherable.

Now we have so many choices – cable tv, satellite tv, internet tv, tv on our phones, and streaming video services like Netflix and Hulu. But we still have the option of OTA, over-the-air broadcast tv. All you need is one of those indoor pancake-type antennas, or an outdoor antenna on your roof. This gives you the “free” channels – ABC, CBS, NBC, Fox, Ion, and PBS, and all their sub-stations. Despite it being free, broadcast tv has been waging a losing battle against paid tv for decades.

All good improvements, right? Read on.

Hmmm, I thought. They’re going to customize ads for me and be able to tell me the best route to get out of the city if there’s an earthquake or flood in my area? This is starting to sound like G-mail, Facebook and Amazon, all of which are constantly monitoring what we do online. Sure enough, the new over-the-air tv protocol would sync with your home internet, sending information back to the tv networks about what you like to buy, what kind of things you post about on Facebook, what type of websites you’re interested in, and so on. That’s how they will select individualized commercials for you. Supposedly you will still be able to watch broadcast tv without connecting it to your home internet if you want, but I have my suspicions that the networks will still spy on its viewers.

TV stations are not actually obliged to switch to the new protocol, and it will be costly for them to do so. For consumers, they will need to buy a tv that has the updated built-in tuner to receive the over-the-air signal, or they will need to buy a converter box. In my opinion, this new tv signal protocol is just a marketing tool to:
1 – get consumers to buy new tvs that will initially be expensive, and
2 – collect more personal information about what we do/watch at home.

So just be aware of what of what data may be collected about you, and decide whether you’re okay with that. If you are, you’ll probably love Next Gen TV.